Appart from when selling the cars, the performance system already works this way.

Finally someone with good and interesting suggestions, very nice. +1

W temacie: way to get rid of lamps

(02-05-2019, 09:00)Remolit Wrote: I'll make you a map completely devoid of lamps, and you still won't get true toptimes.
Breakable objects aren't that big of a deal if you learn to break/avoid them properly.

you know nothing about racing so be quiet please

what is your definition of pros then? top timers? those are no lifers as far as I have seen. pros are the guys that play everyday and even not setting top times or winning every URL, they are there racing and improving little by little and usually they do everything the server has to offer not only 1 thing. casuals are just there to chat and tune cars really.

Everyone here with 1kk+ RP and that already has everything. These people have no reason to play races already, other than spend time, with this feature, these people would never be seen in normal races again.

Temat: exploiter mods? (plus some other curious things)

I was scrolling down through my top times, and saw some really interesting names that have times very close to my exploited ones, so I wanted to share with you guys here, tell me what you guys think about those

Diman improved a minute in 1 year with the same car and setup, incredible!

Idk this guy, T2 is just weird compared to the average time.

Nothing impressive here, T2 is just weird compared to the average time.

I don't even know what to say about this one. Nice dynos I guess.

Another one that I don't know who is. The date of the T2 time is very close to mine tho.

Nothing impressive here, T2 is just weird compared to the untouched average times from 2017.

This one is just funny, since me and anodize got these times on the EXACT SAME HOUR, but in different Months :v

I feel like anodize was battling with mishelka for who has better exploits on these days... I won tho *dab*.

Again, even on the same day/hour.

Idk what to say about this one.

Well and for who is saying that some of these top 3's isn't exploited, here some examples of exploited T1 and non exploited T2/T3:

Temat: Why permanent tho?

Did I insulted the staff, or was toxic to a entire nation and I didn't know? I hacked the game somehow? Did I stealed people personal data? Seriously, what is this ban policy? When with the first acceleration exploit got fixed and some players got banned, they got only a month of ban, and somehow another one gets fixed because of me, and I deserve a permanent ban? People have abused this for MONTHS, and no one gets punished, I use it to draw attention of the staff for 2 weeks and I'm the most horrible criminal in existence... Just, what. I play this for almost 2 years all my achievments (cars, rp etc) was achieved legitmaly(some dozen of people can prove that, actually the entire server can.), my only porpose with the exploit was to make it get fixed fast, deleting the top times and removing some url wins would make all the effect of the exploit dissapear. I'm not complaining about the ban itself, it's just that it's PERMANENT for no real reason a permanent ban should be. I was never a bad person on the server, I was one of the most active moderators on the beggining, I always tried to help everybody, I helped the server with some donations aswell when I started playing, but no, "he exploits he must be forever gone."(Where's the others REAL exploiters ban tho)(and why this sentence wasn't used on others before?) OK... I know what I did was against the rules, but I want a fair punishment if possible, what I did wasn't reason for a permanent ban. 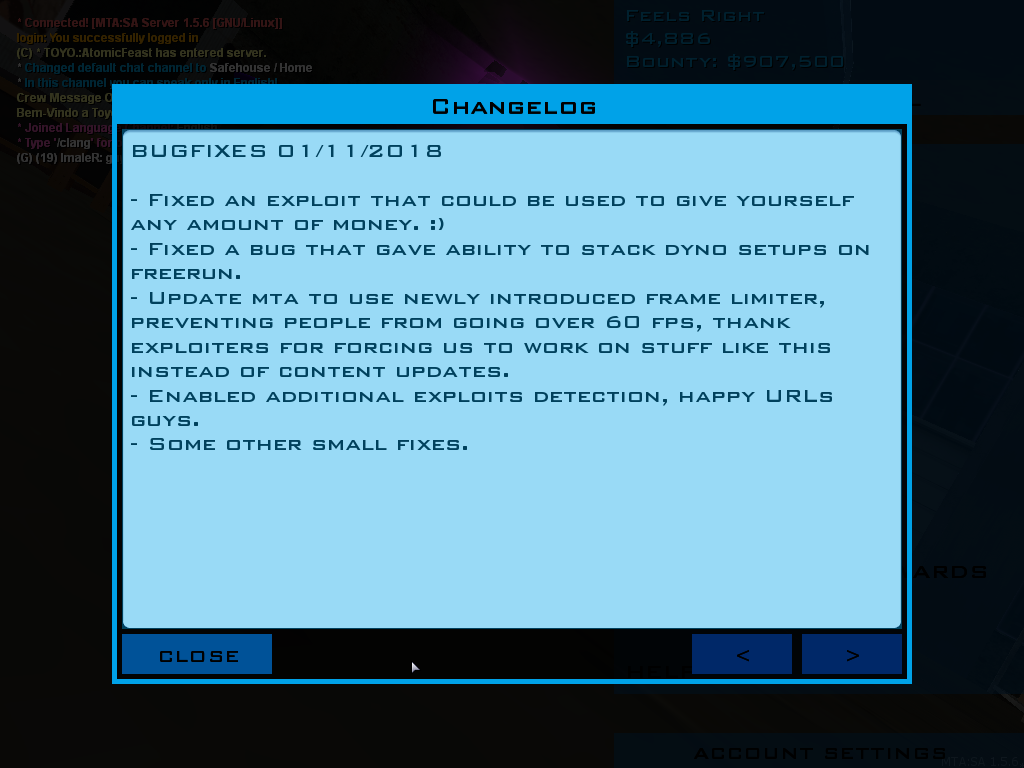 I'm very proud of this server staff as of today, they went after to trying find a solution to a game breaking exploit(Finally), and now nfssa can be a fun place again.

I'm very aware of my punishment and won't complain about it, rules are rules, but I can't express how happy I'm now that people will be able to be competitive with anyone for now on, so congratulations to the staff for keep working and bringing fun to the server(I will still try keeping up with the community here on forum, if my account doesn't get banned here too for some reason).

I know you wanted to be working on content, but for me, fixing game breaking things should be priority(ubisoft pls learn.)

People are really mad at me, and I don't judge then, "why you did this and ariariaria", I wanted the staff to work on this as fast as possible, people getting away with these kind of abuse where getting really annoying, I tried to work with the staff when I was a moderator, but just kept getting ignored, so I tilted and said "F**k it", after my demotion I started enjoying the game a little again, but the unfairness wass still driving me nuts, so I did what I did, but atleast I made it obvious enough, and didn't tried to hide it saying "It's skills/dyno git gud bro" like some cowards.

And for the people saying that my skill are just exploits, well, I play this for 2 years and a half now, and I think I was pretty decent back then, I was one of the first to have 50 url wins for example, Imyonightmare, Rukito, helomyname, OsvaldoX and some other people can confirm it I think.

I don't regret any of this and I think it was good, cuz, because of me, 2 major exploits were fixed, and hopefully things are 70% or more balanced now.

So, awesome people that plays here in nfssa, have fun! And if you find something that can be abused, please REPORT(you don't need to be reckless like me tho).

See you guys in some months(or not I guess.)

Oh, and one last thing: